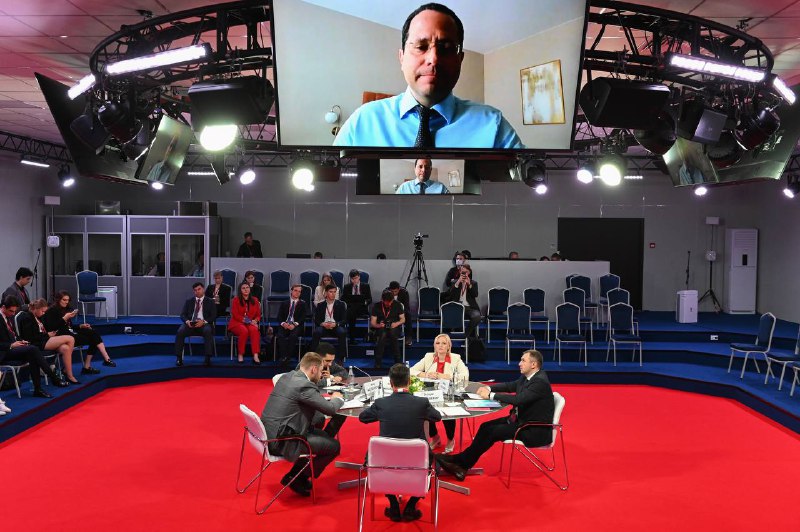 Promoting the Eurasian economic integration among young people, developing mechanisms for youth participation in discussing key decisions in the Union, as well as creating the Eurasian academic mobility system were the topics of the panel discussion "Involving Young People in the EAEU Activities and Processes” held on June 18 as part of the program of the International Youth Economic Forum - SPIEF-2022 Youth Day. The discussion was organized by MGIMO (U) of the Ministry of Foreign Affairs of the Russian Federation.

The session was moderated by Daniyar Turusbekov, Director of the Organizational Support and Protocol Department​ of the Commission and Chairman of the EEC Youth Council. He noted that the discussion within the YIEF continued the discussion on involving young people in the Eurasian integration processes that took place at the venue of the 1st Eurasian Economic Forum on May 26, 2022 in Bishkek. According to Daniyar Turusbekov, the youth agenda amid the Eurasian integration is particularly relevant as the EAEU future and success depend largely on the young generation, and the way in which the Union Member States build work with young people today has a direct impact on the integration process and defines the association’s future image.

Andrey Platonov, Deputy Head of Rosmolodezh, informed on the formats of work with young people practiced in Russia: events of the All-Russian Forum campaign, including the International Youth Forum "Eurasia Global", the All-Russian Youth Entrepreneurship Support Program, projects aimed at supporting creative industries and volunteering activities. "We can find any partners for youth projects in the Union", he stated. According to Andrey Platonov, the sector-specific governing bodies in the EAEU make active use of the best practices of the Federal Agency for Youth Affairs in their countries.

Julia Nesterchuk, Director of the Department for Economic Cooperation with the CIS Countries of the Ministry of Economic Development of the Russian Federation, called upon for active involvement of young people in discussing decisions on the Eurasian integration issues directly impacting young people. "The Eurasian integration processes are very dynamic. New ideas and unconventional approaches of young people are of utmost importance to us. From this perspective, we consider it relevant to involve youth associations, including the EEC Youth Council". According to her, the possibility of discussing the implementation of new, social and humanitarian directions of the Strategy-2025 directly impacting young people (education, science, tourism, etc.), can be considered at the venue of the EEC Youth Council. In turn, Daniyar Turusbekov has stressed that the EEC Youth Council is an association of the Commission’s employees, and expressed the idea that a separate platform involving youth representatives from all the Union countries is required to actively involve young people in discussing and approving draft laws and regulations. Such a platform could be created with relevant support of the Member States.

Evgeny Vinokurov, Chief Economist of the Eurasian Development Bank, reported on the need for humanitarian dimension of the Eurasian integration. According to him, the EAEU transboundary academic mobility plummets, and a fundamental breakthrough is required in this field. In order to cope with this task, Evgeny Vinokurov proposed to proceed to forming the Eurasian academic mobility program naming it after Shokan Valikhanov, Kazakh Ethnographer and Traveler (1835-1865).

Stanislav Surovtsev, Vice-Rector for Youth Policy, Social Work and International Relations of MGIMO (U) of the Ministry of Foreign Affairs of the Russian Federation, confirmed the thesis that existing programs of the EAEU interuniversity mobility were of little interest to students, proposing the Member States, jointly with universities and student communities of the Union countries, to think about new and interesting formats for young people. Besides, Stanislav Surovtsev elaborated on the objectives and activities of the cooperation program between the Commission and MGIMO for 2022-2023, in particular, in terms of which it is planned to implement a master's program in the fields "Jurisprudence" and "Economics" jointly with the Member States’ leading universities. According to him, joint work in this respect will contribute to large-scale involvement of students and young scientists in the EAEU activities, as well as promote the ideas and values of integration among young people.

International youth communication and the role of young people in developing relations between the EAEU and its external partners was another discussion topic. This was reported by Areg Aghasaryan, First Deputy Chairman of the Council of Young Diplomats of the Ministry of Foreign Affairs of the Russian Federation, emphasizing the role of young diplomats in presenting the Union’s positive image across the globe and protecting national and supranational interests in working with foreign partners.