Section about the EEC 10th Anniversary 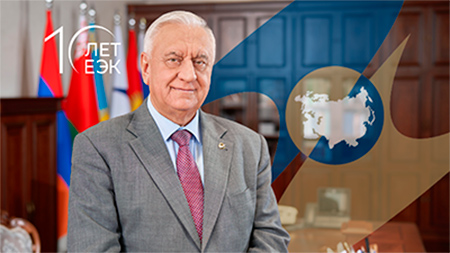 Over the course of ten years, the Commission as a permanent regulatory authority of the Eurasian Economic Union, has been achieving objectives to ensure its functioning, draft proposals in the field of further development of the Eurasian economic integration based on the principles of mutual benefit, equality and consideration of national interests, economic feasibility of decisions as well as openness, transparency and objectivity.

During this period, we managed to ensure high rates of integration processes development owing to high ground decisions adopted by the Heads of State and Government of our countries as well as highly coordinated work of the Commission and the Member States' ministries and departments.

The Commission succeeded owing to critical activities of the Council’s members, the Board’s members, officials and employees of the Commission, making a worthy contribution to developing the Eurasian Economic Union.

I express my gratitude to all international employees of the Commission. Your conscientious work is the legal and economic foundations created for the integration processes development. The Treaty on the Union, the Customs Code and the Strategic Directions for Developing the Eurasian Economic Integration until 2025 have been adopted, new members and Observer States have joined the Union, free movement and social guarantees of workers have been ensured, the Pension Agreement has come into effect, more than 50 technical regulations and more than 12,000 international standards are in force and the single market of goods for more than 180 million consumers successfully operates.

I am confident that the accumulated experience, the highest professionalism of the members of the Council, the Board, officials and Commission’s employees will continue to meet all the demands of the times and improve the quality and efficiency of the Eurasian integration.

Congratulations on the anniversary, dear friends and colleagues!

I wish you new achievements, good health and prosperity to all!