Mikhail Myasnikovich, Chairman of the EEC Board: "The business community should be more extensively involved in financing scientific developments" 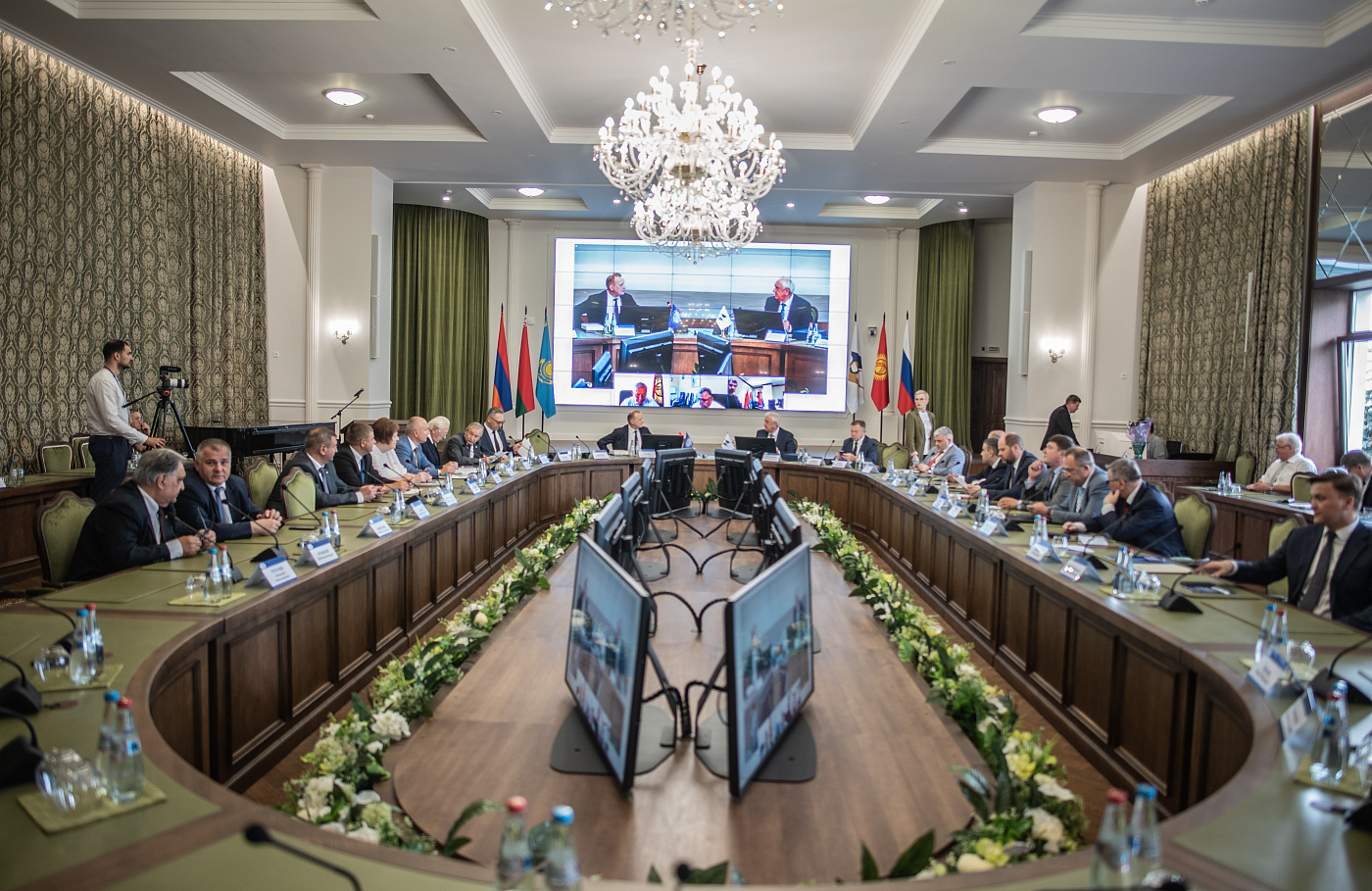 "Promising scientific developments and projects should become a key element of technical upgrading and innovative development, lay basis for the Eurasian Economic Union’s self-sufficiency and ensure the economic growth of participating countries", stated Mikhail Myasnikovich, Chairman of the EEC Board, speaking at the International Scientific and Practical Conference "Scientific and Technical Cooperation as the Basis for the EAEU Development in Light of New Economic Challenges: Problems and Solutions" held on June 20. The conference was organized by the Eurasian Economic Commission and the National Academy of Sciences of Belarus.

The conference was attended by representatives of science, education, manufacturing enterprises and government agencies from the EAEU countries. They discussed handling of applied problems to decrease dependence on imported equipment and technologies, as well as identified promising areas for developing their own applied scientific base.

The conference included four sections: manufacture and import substitution in the pharmaceutical and biological products market; information and communication technologies (ICT); developing engineering industry and new materials; and developing the EAEU economy in light of structural and technological transformation. The results were summed up at the plenary session held in the format of an extended meeting of the Presidium of the Scientific and Technical Council under the Chairman of the EEC Board.

As Mikhail Myasnikovich noted during the plenary session, the proposals developed following the conference would be taken into account in preparing and implementing joint programs and high-tech projects, forming national databases on science and technology, as well as be in demand by the high-level Working Group being formed to create conditions for improving the internal economic stability of the EAEU States.

"Nowadays the Commission, jointly with the Member States, elaborates a Strategic program and priorities for the Union’s scientific and technical development. The following trends are considered as priorities: information and communication technologies; biotechnologies, pharmacology and medicine; mechanical-engineering technologies, manufacture of new materials and fuels, agriculture, and extractive industries. The list is not exhaustive and will be supplemented if necessary", the Head of the EEC Board said.

Therefore, introducing efficient mechanisms to finance promising scientific research and development is a relevant matter. Mikhail Myasnikovich noted that the EAEU had no appropriate institutional infrastructure, it was planned to elaborate relevant draft decision of the Eurasian Intergovernmental Council for its creation.

Particular attention should be also given to establishing contacts between research institutions and production sites, the Chairman of the EEC Board believes.

In this regard, he proposed to organize a joint meeting at the Commission's venue between the Scientific and Technical Council under the Chairman of the EEC Board and the Advisory Committee on Interaction between the EEC and the EAEU Business Council.

Vladimir Gusakov, Chairman of the Presidium of the National Academy of Sciences of Belarus, noted at the plenary session that the today’s agenda included an extremely relevant matter: priorities of the Union States’ scientific and technical development. "In fact, this is a question of establishing specific trends and measures to ensure scientific and innovative security and strengthen technological sovereignty of each of our countries and the integration association as a whole", Vladimir Gusakov stressed.

In order to achieve balanced national development, he proposed to ensure unifying the Union States’ potentials by using specific scientific and technical competencies of each of the countries.

Summing up the session devoted to the engineering industry and new materials, Artak Kamalyan, EEC Minister in charge of Industry and Agriculture, noted that the discussion attendees agreed on the need to pay special attention to developing import substitution in the EAEU countries.

In this regard, according to Artak Kamalyan, the Commission, jointly with the Member States, should solve the issue of financing cooperative projects, as well as continue joint research and information work.

"When it comes to further deepening of cooperation and import substitution in our Union, such areas of work are contained in the EAEU Industrialization Map. This information resource accumulates information on about 200 major investment and cooperative projects being implemented and planned for implementation for a total of 195 bln dollars. This entails aircraft engineering and shipbuilding, automobile and light industry, pharmaceutical industry, metal industry, construction materials industry, manufacture of road-building machinery, special and municipal equipment and other industries. The Industrialization Map is updated on a regular basis", Artak Kamalyan said.

In turn, Sergei Glazyev, Minister in charge of Integration and Macroeconomics, stated the importance of elaborating a strategic program for the EAEU scientific and technical development. Elaborating common development priorities should be its core. "It is obvious that we should place a premium on emerging technologies that will become the core of the new technological paradigm of the economy", Sergei Glazyev is confident. According to him, projects designed for work will be selected by a broad group of experts - up to 2,000 people.

Viktor Nazarenko, EEC Minister in charge of Technical Regulation, informed on the degree of commonality of the EAEU technical regulation. "88% of the products being traded in the Union's market are covered by common technical regulation. Nowadays, the harmonization of standards, for example, for electrical engineering, with international requirements exceeds 80%. Along with that, periodic assessment of the scientific and technical level of the Union's regulations is an important aspect of improving competitiveness and export potential”, Viktor Nazarenko believes.