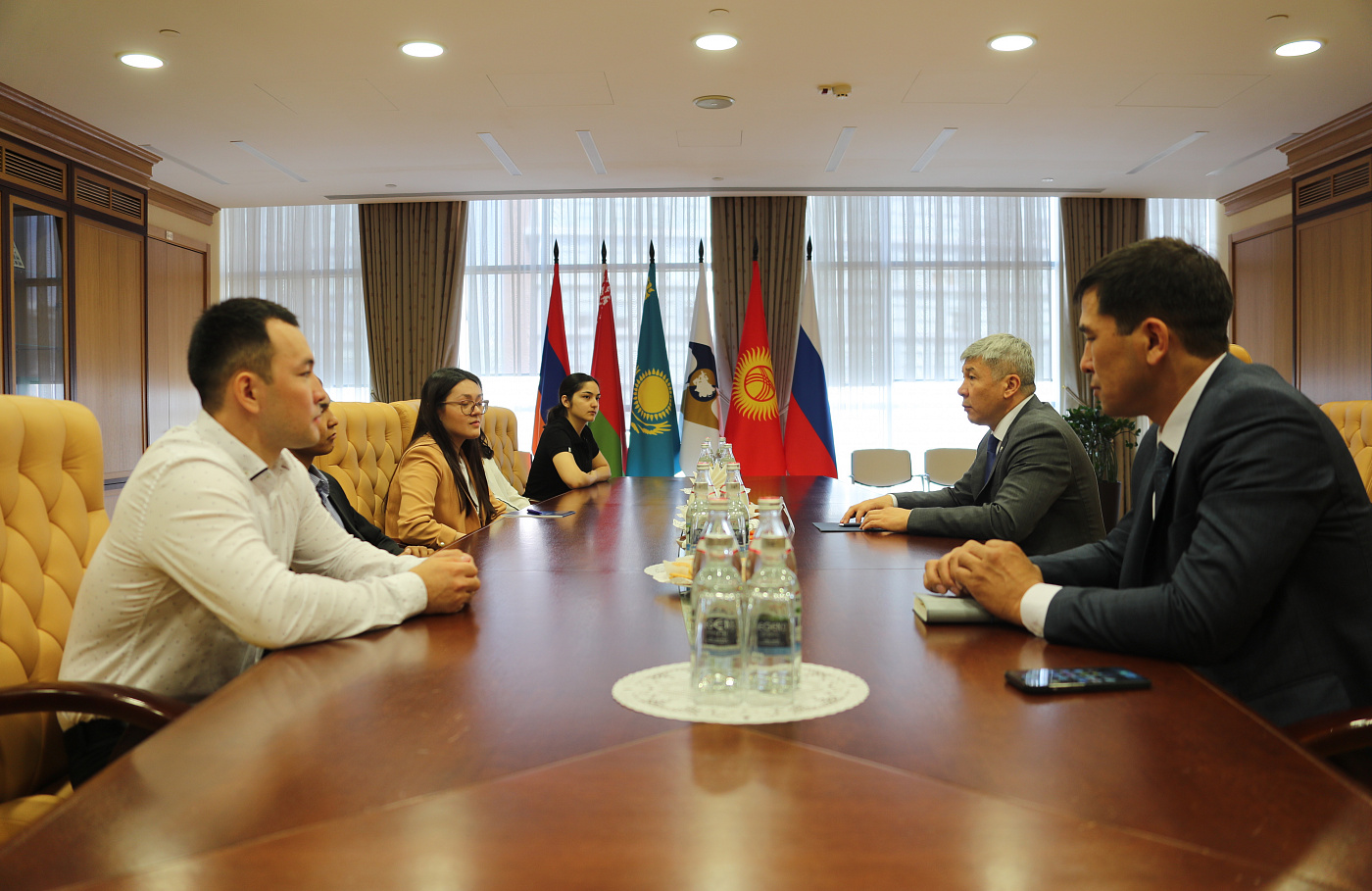 On July 4, at the headquarters of the Eurasian Economic Commission, EEC Ministers Varos Simonyan, Arman Shakkaliev and Maksat Mamytkanov met with graduates of the Financial University under the Government of the Russian Federation who came to study from the Eurasian Economic Union countries.

The event began with a tour of the Commission building guided by Daniyar Zhaksylyk, Deputy Director of the EEC Organizational Support and Protocol Department (OSPD). He spoke about the activities of the supranational regulatory authority of the Eurasian Economic Union – the EEC, which celebrates its 10th anniversary this year. Daniyar Zhaksylyk also provided information about the EAEU symbols, the OSPD structure, and demonstrated the Honored Guest Book. In the hall of the Commission’s Board, students got acquainted with the voting process with the use of the "Electronic Board" program.

At the meeting with the university graduates, Varos Simonyan, EEC Minister in charge of Internal Markets, Informatization, Information & Communication Technologies ​of the EEC, took the initiative that applicants for a particular position with the EEC and employees of the Commission should undergo mandatory training in online courses on Eurasian law and obtain certificates following their results.

"The EEC international organization should employ people who know what Eurasian law is. We will enhance the EEC's role by introducing these courses to affect the quality of the Commission's work, which forms policies for about 185 million people," Varos Simonyan noted. In his opinion, one third of the Commission's employees should undergo retraining every year to improve their qualifications and pass an exam. This is an international practice adopted in the European Union.

An important initiative involves the creation of the Center for Eurasian Integration at the Financial University dedicated to the EAEU economics and intended to train personnel for national administrations and the EEC. "We are a young organization, we are ten years old. We should use successful tools to promote the EAEU. The decisions made must be of high quality," the EEC Minister emphasized.

According to the Financial University graduates, this is a good idea since Eurasian law has not been represented in the current university curricula. Students announced a number of initiatives at the meeting. In particular, they proposed to strengthen friendly relations with students from the EAEU countries on the basis of universities.

In this regard, Varos Simonyan recalled that the 1st Youth Forum of the CIS and the EAEU is planned for August this year on Lake Issyk-Kul. According to the EEC Minister, it is important that the youth from the EAEU countries communicate and develop a cultural dialogue. Cultural diplomacy allows promoting your countries' interests, and youth initiatives should give impetus to the EAEU development.

"Where there is competition, there is progress," with these words Arman Shakkaliev, EEC Minister in charge of Competition and Antitrust Regulation, addressed the Financial University graduates.

"The presence of fair competition in any area of life ensures stable development and high quality. Be competitive, keep moving forward and never stop learning. Knowledge, sports, and spiritual values are the three pillars, the foundations for the harmonious development of an individual. And where there is a balance, and all three areas develop synchronously, a purposeful, balanced personality is born in this synergy.

Maksat Mamytkanov, EEC Minister in charge of Customs Cooperation, congratulated the graduates of the Financial University under the Government of the Russian Federation on their graduation: "I congratulate you on such a significant event as graduation from the higher educational institution. I am sure you will be able to apply the knowledge and successful experience you acquired during your studies in the professional field and in life in general."

Maksat Mamytkanov invited students to consider interesting ideas and project initiatives that can be implemented as part of customs cooperation between the EAEU countries. "We are trying to create a thoughtful, reliable and transparent customs regulation system. We expect new employees to use advanced technologies in their work," the EEC Minister stressed.

Maksat Mamytkanov answered students' questions. The dialogue ended with an agreement on further cooperation and the possible organization of various educational events devoted to integration and the EAEU's development prospects.