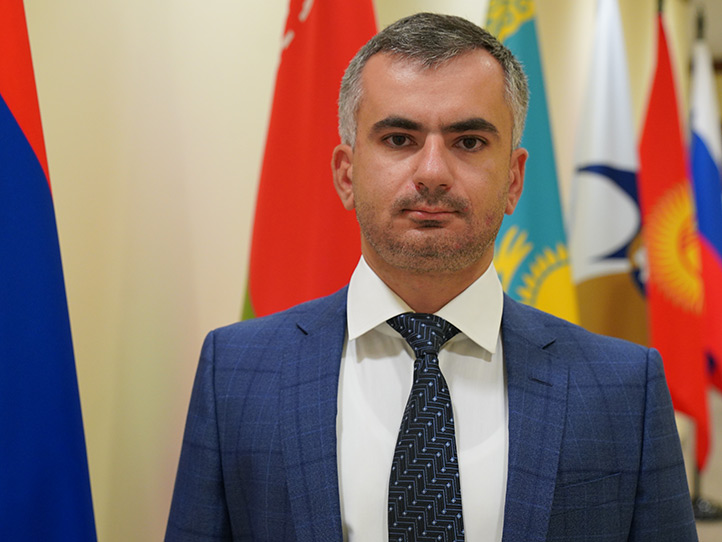 Alexander Sergeevich Aleksanyan was born on December 9, 1984 in the city of Gyumri (Republic of Armenia).

In 2007, he graduated from the Vladimir State University with a qualification of a Mathematician, System Programmer.

The new department director has extensive experience in large enterprises and research institutions in the field of information technology development and ensuring sustainable infrastructure.

In particular, under his leadership, a unified platform for processing and interpreting data from the Russian Union of Auto Insurers was successfully developed and put into commercial operation. The platform is capable of accompanying platforms for a super service - Evroprotokol Online.

Besides, A.S. Aleksanyan was engaged in designing a platform for the services being developed as part of digital transformation of the Prosecutor General's Office

An unparalleled high-performance liquid-cooled data processing center was commissioned and successfully started in consultation with Aleksanyan, which ranks first in the TOP-50 CIS supercomputer rating and 62nd in the TOP-500 of the relevant world rating. Software was also developed for managing a high-performance computing complex (more than 6,000 servers).

Throughout his career, more than 10 high-performance computations (HPC-projects) have been successfully made in the CIS and Europe, high-performance data processing centers have been designed and commissioned, which are on the TOP-50 of most powerful supercomputers in the CIS and TOP-500 of the most powerful supercomputers in the world.

Since 2020, he is Assistant Minister in charge of Internal Markets, Informatization, Information and Communication Technologies of the Eurasian Economic Commission.

On August 27, 2021, he was appointed Director of the Information Technology Department of the Eurasian Economic Commission.