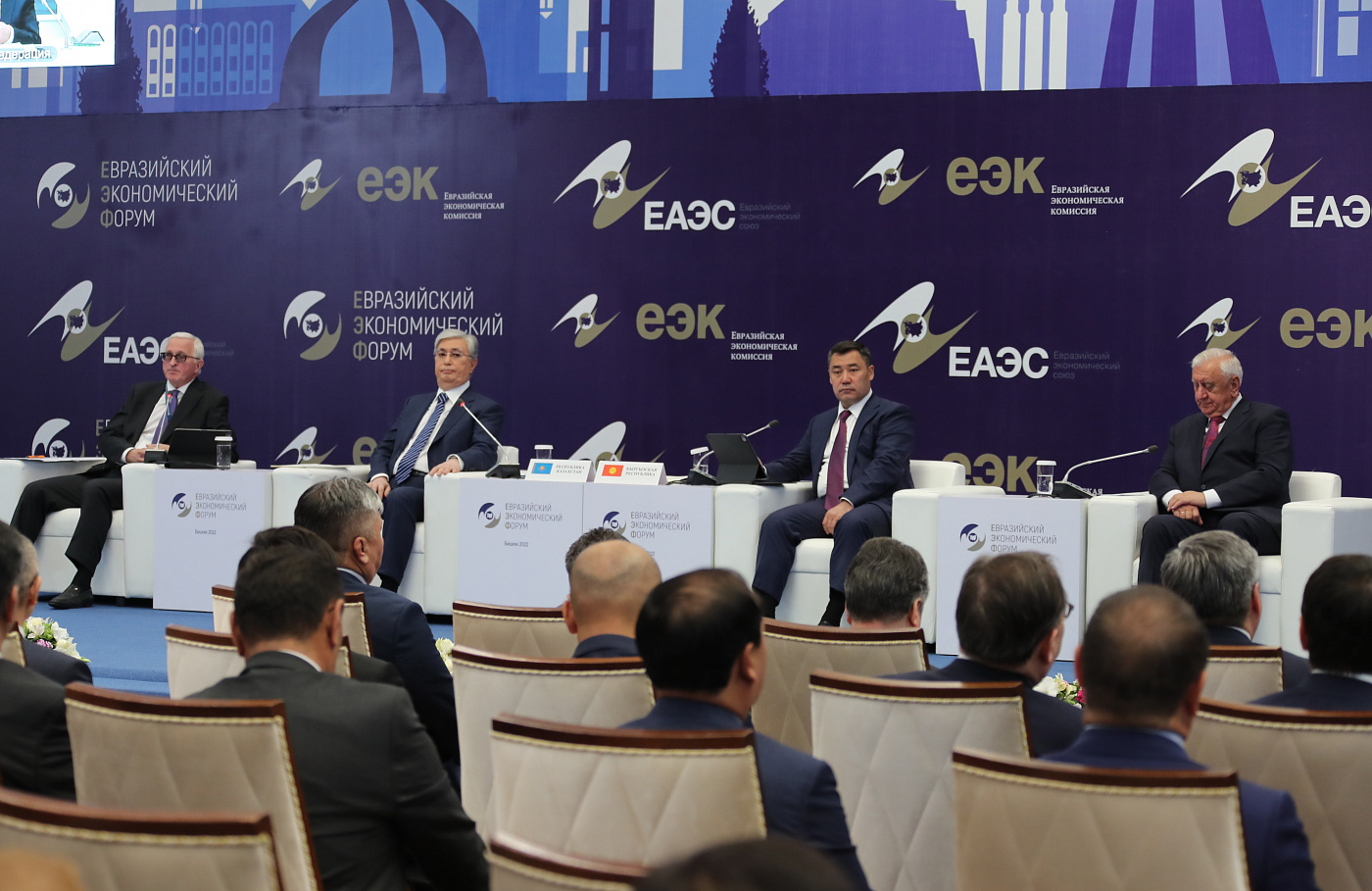 The leaders of the EAEU States gave their opinion on economic integration in the Eurasian space and the development of their States' economies.

Sadyr Zhaparov, President of the Kyrgyz Republic chairing the Union, noted that the EAEU development was a complementary process depending on all members of the association rather than the isolated actions of each individual Union State.

According to President of the Kyrgyz Republic, the factor of closer coordination and interaction is of particular relevance in the context of growing turbulence in world politics and selective sanctions against the Union partners.

"In such a situation, we all must promptly and efficiently respond to external adverse factors as never before," Sadyr Zhaparov said, reminding that the Union countries already have good experience in responding to challenges during the pandemic.

"External pressure on any Member State cannot be viewed in isolation from the whole Union or any other Member State. In this regard, we need to work in lockstep and strengthen the coordination of our actions," he said, expressing confidence that together the Union countries will be able to overcome all challenges facing the EAEU.

Sadyr Zhaparov stressed the need to pay special attention to youth. "In its appeal early this year, the Kyrgyz Republic has put forward an initiative to annually hold the Eurasian Youth Forum. Hence, we are ready to provide our young generation with a venue for exchanging opinions on issues related to the Eurasian integration and the vision of our Union's economic development." According to him, it would help lay a solid foundation for promoting the ideas of the Eurasian integration.

The priority of the Union's digital agenda was noted by Nikol Pashinyan, Prime Minister of the Republic of Armenia.

"As part of the Union's digital agenda, it is necessary to coherently promote initiatives aimed at deepening integration processes and gaining direct benefits for economy, citizens and the EAEU States," Nikol Pashinyan noted.

Kassym-Jomart Tokayev, President of the Republic of Kazakhstan, noted that the Eurasian Economic Union had shown its efficiency, including under current extreme geopolitical conditions.

At the same time, he drew attention to the quite successful activities of the Eurasian Economic Commission on finding compromises between the Member States.

"To date, 80% of barriers have been removed as a result of consultations held at the EEC. We hope this difficult work will be continued. Integration is a very labor-intensive process of finding compromises between the Member States," Kassym-Jomart Tokayev said, emphasizing that Kazakhstan was a supporter of developing the Eurasian integration on a commercial and pragmatical basis.

Vladimir Putin, President of the Russian Federation, noted the long-term benefits of the Greater Eurasian Partnership and its relevance in current realities.

"It is time to draft a comprehensive strategy for developing the Greater Eurasian Partnership that must reflect the key international challenges facing us, determine future goals and contain instruments and mechanisms for achieving them. We must consider further steps in developing our system of trade and investment agreements, in part, with the participation of the Shanghai Cooperation Organization, Association of Southeast Asian Nations and BRICS member countries," Vladimir Putin said.

"It would be no exaggeration to say that Greater Eurasia is a big civilizational project, and the main idea is to create a common space for equitable cooperation for regional organizations. The Greater Eurasian Partnership is designed to change the political and economic architecture and guarantee stability and prosperity on the entire continent – naturally, taking account of the diverse development models, cultures and traditions of all peoples," Head of the Russian State added.

Roman Golovchenko, Prime Minister of the Republic of Belarus, placed greater focus on the need to develop an international treaty of the Supreme Eurasian Economic Council on the mutual recognition of prospectuses for securities registered with the authorized authority of a Member State.

In addition, Roman Golovchenko proposed to intensify efforts for expanding the use of national currencies by the EAEU States in trade settlements providing for the establishment of prices and contract values in national currencies.

"The Eurasian Economic Union is our reliable protection against external threats. This is a large market, a large demand, a large volume of labor and financial resources. Only through joint efforts and by strengthening and deepening integration, we will be able to solve all important tasks, find new possibilities for development and counter external pressure," Prime Minister of the Republic of Belarus noted.

Mikhail Myasnikovich, Chairman of the EEC Board, drew the attention of the Heads of State of the EAEU countries to the importance of creating the Union's joint companies and production clusters in the future for further integration development, as well as to the joining of the EAEU countries' efforts in other cooperation areas.

"The Forum has met all expectations by offering ways to strengthen integration, which will ensure the EAEU self-sufficiency and the sovereign development of the Member States' economies, despite all challenges and threats," Chairman of the EEC Board summed up.